Election Day is almost upon us and an informed voter is a dangerous voter, which is exactly what these candidates like –– danger!

Supreme Galactic Leader isn’t a job for the faint of heart. It requires a firm grasp of modern warfare and a diplomatic approach to intergalactic relations.

Residents of the galaxy have a tough choice ahead of them, one could even say it is an impossible decision. We’re here to help by giving you the rundown on each of the candidates. They may not be perfect, but they are ours.

Vote early, vote often, and remember only you can help prevent world peace. 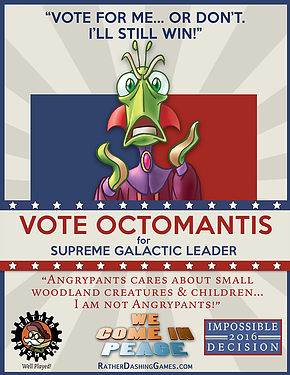 Overcoming a tragic childhood where none of his three parents ever took him to the circus, Octomantis has proven he can rise above the petty disappointments of every day life. He works tirelessly to achieve his lifelong dream of being the one and only being left in existence.

His fierce rivalry with Captain Angrypants was forged after an unfortunate ice cream incident. When asked why you should vote for him his reply was very focused, “Angrypants cares about small woodland creatures children... I'm not Angrypants."

We also inquired about his plans for galactic development, to which he replied, "Angrypants voted to end interstellar war and increase economic opportunities for the under privileged... I'm not Angrypants."

The Admiral supports the carnivorous diet movement and maintains a healthy, balanced died of his enemies. He was proud to remind us he cannot be defeated since he does not have feet. 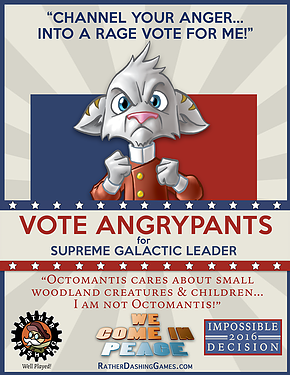 "Channel your anger into a rage vote for me, Captain Angrypants... Hey, at least I'm not Octomantis!"

The sworn arch nemesis of Admiral Octomantis may look like an adorable kitty cat, but beware his rage-fueled battle purr! After "dropping" his ice cream cone on The Admiral it became clear Angrypants was destined for dastardly greatness.

Single-minded of purpose, Captain Angrypants, worked his way up through the ranks to achieve his title and lead his forces to dominance. If elected he vows to destroy Admiral Octomantis, no matter the cost.

We think it goes without saying, but we’ll say it any way… Captain Angrypants is NOT Octomantis, so if that matters to you as much as it does to him, vote for Angrypants.

"Dominating the galaxy is the role I was born to play."

Violet began her career as the galaxy’s sweetheart, making a name for herself in 7D StereoOptotromic Smell-o-Vision films. (Her IMDB credits are quite extensive.) Looking to edge up her image, she landed the role of a lifetime playing a world-dominating super villain. A method actor through and through, she couldn’t shake the role even after filming ended. Violent Violet was born.

"As an actress I learned to pretend to care. I'll do the same for you,” she promises her constituents at every rally. "I vow to tell the media what to tell you. One channel, one voice... Mine."

It remains to be seen if her candidacy will be taken seriously, or if this is actually a marketing stunt for a sequel, but the truth is she is wildly popular so the other candidates shouldn’t rule her out just yet. 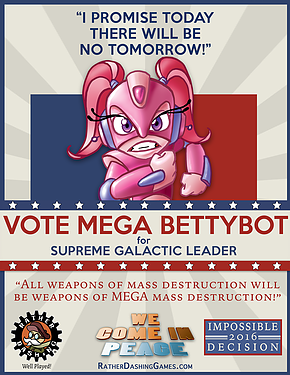 "I promise today there will be no tomorrow."

Mega in every way, Mega Bettybot 2016 is mega awesome and she promises to bring that megawatt gravitas to the office of Supreme Galactic Leader.

Her signature mega backflip off the podium at every debate has been mega entertaining and elicits mega cheers from the crowd. She is definitely a mega contender in this race. Mega. 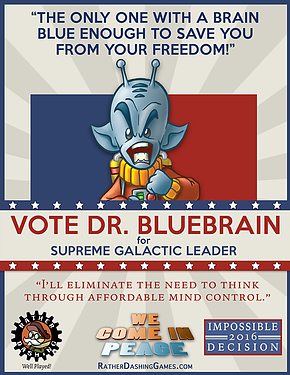 "I'm the only one with the brain blue enough to save you from your freedom."

Bluebrain earned his Doctorate in Planetary Destruction and is the only candidate in this race to have official credentials and the diploma to back it up.

Teased as a child for the blueness of his brain, he quickly discovered it was the true source of his maniacal genius. His giant blue brain could be exactly what this galaxy needs to make all the decisions for us. The “good” Doctor promises, “I'll eliminate the need to think, through affordable mind control."

He has a definitive plan to end all arguments over education costs, beginning at the top level. He has repeatedly declared, "I'll eliminate college loans by eliminating college.” 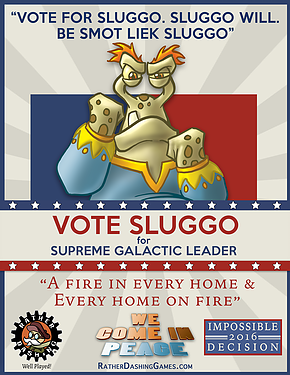 "Vote for Sluggo. Sluggo will. Be smot liek Sluggo."

No title necessary for this charismatic candidate. He doesn’t stand on ceremony and doesn’t need your approval. He stands for chaos and ooze.

His platform is simple, “A fire in every home, and every home on fire.”

A rallying cry of “Mass destruction equals jobs” is his favorite sound and his flame red hair mirrors the fire in his heart.

A famous butler once said, “Some men just want to watch the world burn.” Sluggo approves this message. 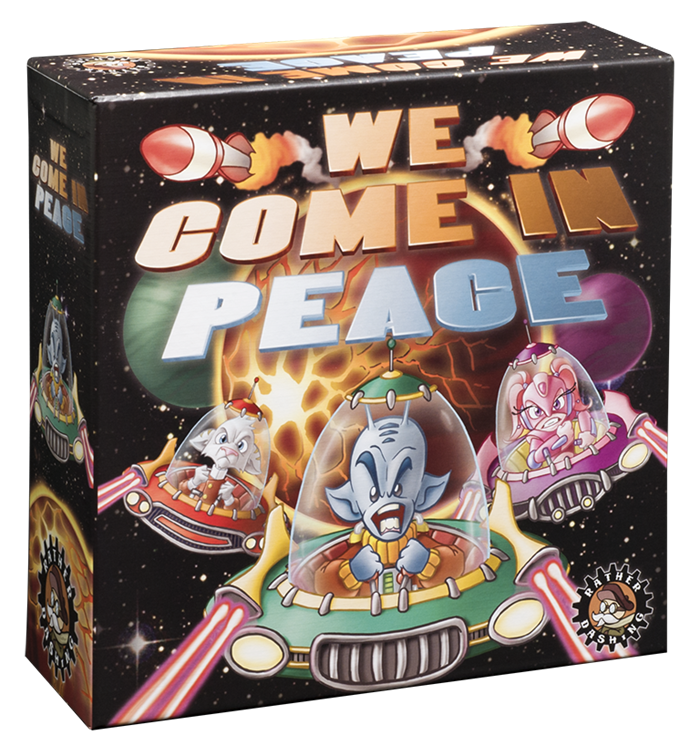 We hope this has helped you get a better grasp on the candidates and which one is right for the future galaxy you want to see. There will be fire, there will be destruction, but who will be left standing is up to you.

Try your hand at world domination and check out our game We Come in Peace, featuring all of the candidates above, for a raucous good time of destructive dice-rolling chaos! Available now online and at your Friendly Local Game Store.