A New Twist on Tile Games

This Belongs in a Museum is not your typical tile-laying game.
Built on the familiar mechanic of placing tiles to create the board as you play, we’ve added some fun, new twists to this beloved game genre.

Action Tiles
Some of the tiles in This Belongs in a Museum have action icons on them that give you an additional benefit when placed. This allows you to manipulate the board as gameplay progresses and create an ever-shifting landscape of give and take between the players.

There are three different action types you can tap as part of your strategy: Rotate, Swap, Replace

The Rotate Icon allows you to choose a tile in play (already placed) and rotate it in place any direction to change how it lines up with the tiles around it.

The Swap Icon allows you to choose TWO tiles in play and switch their locations, placing them back in any way you like. You can rotate them to create new connections beneficial to your scoring or detrimental to an opponent.

The Replace Icon allows you to pick up a tile in play and put it in your hand for later use, replacing it with a tile from your hand. If the tile you place has an action icon on it, you do NOT get to then use that action as well.
In This Belongs in a Museum you can also choose to forfeit the icon action in exchange for moving a Mummy character to anywhere on the board. (More on Mummies later.)

There are a few limitations: You cannot use the action icons to move or manipulate the Mummy Tomb, Base Camps, or any tile with an Archeologist or Mummy on it at the time the action tile is laid. 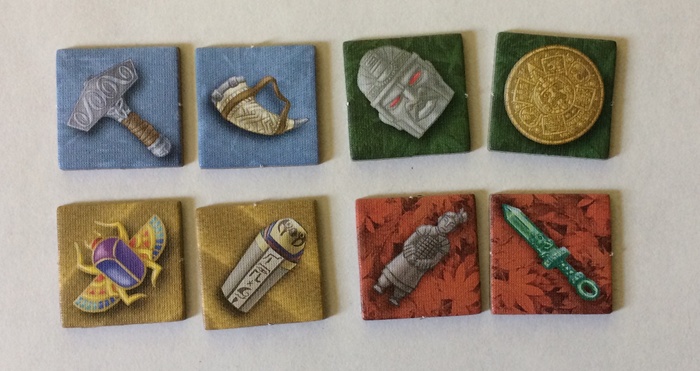 Artifacts
Collecting artifacts adds points to your score and adds another layer of strategy to your gameplay. There are eight different artifacts in the game. During set up, you will choose 5 artifacts at random from your archeologist's set. Those are the 5 artifacts you will be trying to collect throughout the game. You need to move your archeologist to land on the artifact spaces on select tiles to collect that artifact and score the points for it at the end of the game. Collected artifacts are worth 3 points each.

Mummies
Mummies act as boons or foils to scoring sections of connected dig sites. You can move ANY mummy by forgoing the action permitted by an action tile and choosing to move the mummy instead.

Placing the mummy of YOUR color on another player’s dig site section pulls the scoring for that entire section to you. If another player’s color mummy is in one of your sections at the end of the game, they earn the points for that section that otherwise would have gone to you! 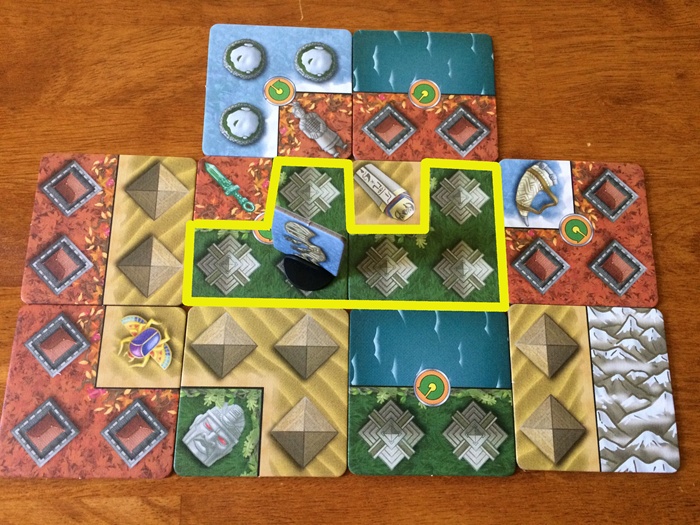 In the above image, the green area surrounded by the yellow line illustrates a scoring section that would steal points from the green archeologist and give them to the blue archeologist because the blue mummy is occupying that section.

Mummies also block movement. Archeologists cannot move through a space occupied by a mummy. Any same color dig site that is directly connected to the site the mummy occupies is considered cursed and inaccessible. In our example above, the entire green section surrounded by the yellow line is considered impassable. Note: tiles connected via airports, rivers, or mountains are not considered cursed and can be moved through. 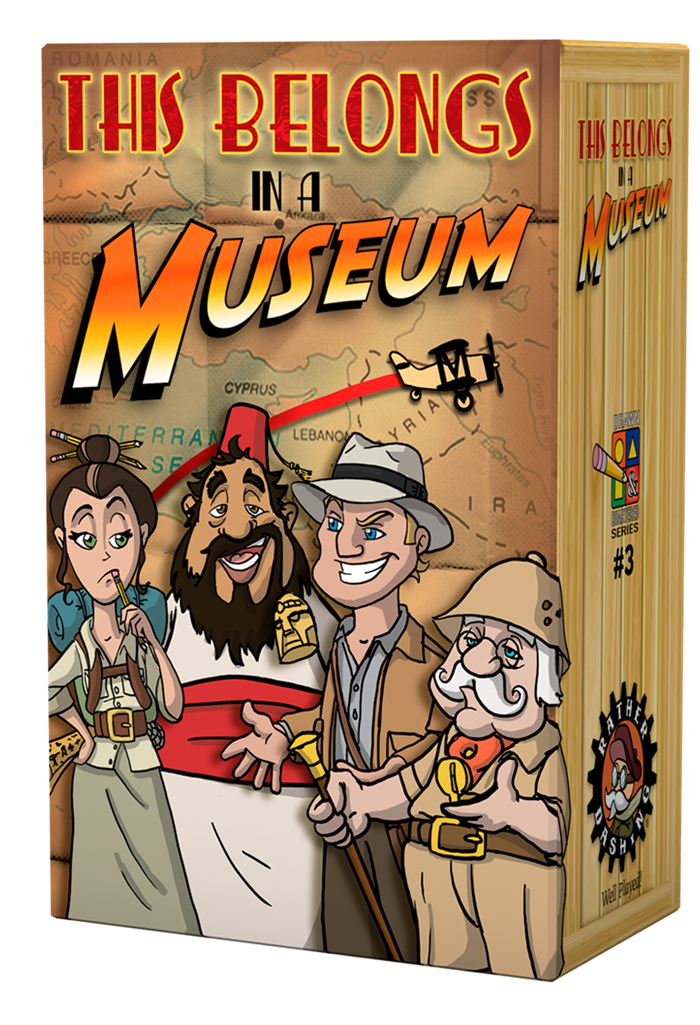 Why You Should Be Playing This Belongs in a Museum

Let’s recap the many reasons you should put This Belongs in a Museum in your game table rotation:

Ask for This Belongs in a Museum at your Friendly Local Game Store or order online to have the adventure delivered right to your door.