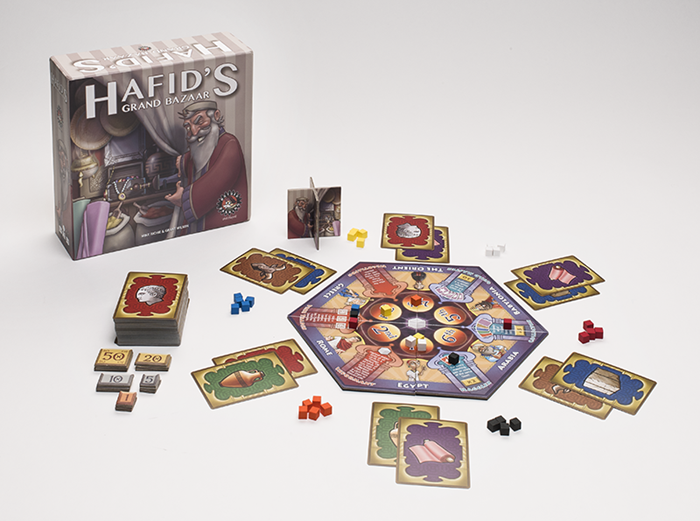 This lively bidding and negotiation game for 2-6 players has inspired some pretty lively table talk and player interaction in our demos. You can read more about an epic session at Gen Con that lead to real money and steak dinners entering the trade discussions in our blog “Trading Gets Wild in Hafid's Grand Bazaar.”

Mark Streed from Boardgame Corner got an advance look at this game back at the GAMA Trade Show in March and eagerly anticipated its release:

“Not only is [Hafid’s Grand Bazaar] a beautiful game, but it is also one of the best bidding and negotiating games I’ve played in a while. So many fantastic negotiating moments! With some unique set collection, each game round is unique in some way.”

Over at A Pawn’s Perspective, Rob Kalajian was impressed, despite his normal dislike for bidding games!

"I’m not normally a fan of bidding games, but Hafid’s Grand Bazaar manages to take the mechanic and make it approachable and fun,” Kalajian says. "Player interaction is high and makes for some great game sessions … Everything, box included, is ultra sturdy and high quality ... The game feels built to last.”

The highly social aspect of this game was not lost on Paste Magazine’s Keith Law, landing Hafid’s Grand Bazaar in their list of Best Games from Gen Con 2017!

“Hafid’s [Grand Bazaar] has a big negotiation component on top of its set collection mechanic that makes this a much more social game than all of the others of its ilk, like adding Go Fish to a multi-player Jaipur,” he wrote. 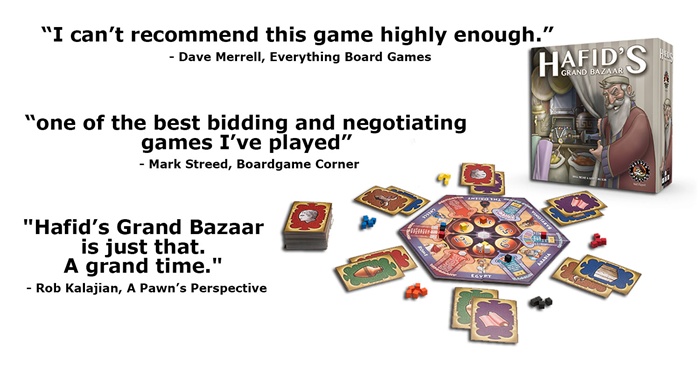 This was echoed in by Roll Dice Take Names when they said the game has “a good mix of a lot of interaction, some take that, and a lot of table talk” and that “thematically it’s a pretty cool game.”

Game Nite Magazine’s Serge Pierro also felt the potential for group fun with this one. “Hafid’s Grand Bazaar is a fine family/party type game, as the freeform trading phase will be both chaotic and provide lots of laughs (and frustration) for all of the participants.”

Why should you get Hafid’s Grand Bazaar? Dave Merrell at Everything Board Games says, “I can’t recommend this game highly enough.”

Or you can take Streed’s word for it: “Really enjoyable, this is one to not be missed, folks. Give it a closer look.”

Still not convinced? Kalajian has the last word, "Hafid’s Grand Bazaar is just that. A grand time."


Hafid’s Grand Bazaar is available at your Friendly Local Game Store and through our website.

Check out How to Play videos, Play Throughs, and more on the game page for Hafid’s Grand Bazaar.
« Previous
Next »