From camels to milkshakes, and spices to steak dinners, everything is up for grabs in the Negotiation Phase of Hafid’s Grand Bazaar. 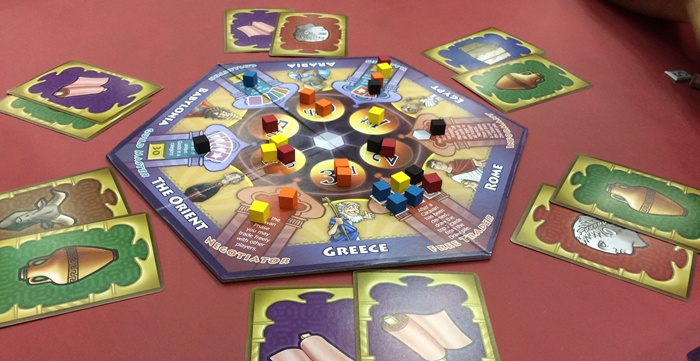 In Hafid’s Grand Bazaar players bid, bargain, and trade goods to create valuable sets they can sell to customers for points. We recently ran events at Gen Con and witnessed some seriously fantastic bargaining skills. We had such fun watching everyone who sat at the table get in the spirit of the game with clever trades and good-natured haggling. What follows is a case study of one play through that led to an epic trade that became legend during the show.

It started innocently enough with a group of five players, four who knew each other and a fifth stranger (spoiler: he didn’t stay a stranger for long!). The cast of this story is Corey (nephew), Jacqueline (niece), Steve (uncle), Ruth (aunt), and Daniel (stranger, for now).

This game was played in 5 rounds, with each player getting a chance to start the Bidding Phase during the game. The first round was pretty tame as the players familiarized themselves with the rules and flow of the four phases of each round (Bidding, Caravan, Negotiation, and Selling).

In round two, the imaginative trading started and it was the first time real money had entered a game for us. Corey really wanted a card representing Linen in the Textiles category and put up a Finished Goods card, a commemorative Gen Con 50 die, AND all the change in his pocket for it. Daniel agreed to terms and they made the trade. 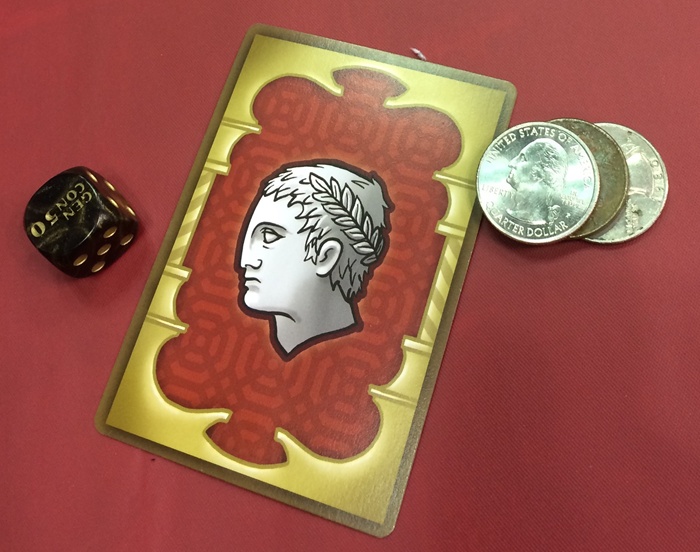 We were surprised to have this type of trade escalate so early in the game, but we did have previous games where a milkshake was traded for a goat and a player asked a stranger at another table for an onion ring to complete his trade, so we knew it could get creative.

Table talk is highly recommended in Hafid’s Grand Bazaar and Daniel (our non-related player) fell into an easy camaraderie with the other players. There was a lot of laughter and joking as the players discovered a shared love of the show Parks & Recreation and there were a lot of quotes thrown around, particularly quotes from Ron Swanson. Daniel told the group about St. Elmo’s Steakhouse (just across the street from the convention center we were in), how good their steaks are, and that they filmed some scenes for the show there.

In the fourth round, Corey found himself without access to a customer to sell his wares to and had to negotiate with Ruth for access to her customer to score points. She exacted a price for that service and walked away from the trade with all the remaining cards from Corey’s hand, setting herself up for some serious scoring as they entered the final round.

The conversation kept returning to food and those St. Elmo’s Steakhouse steaks were on everyone’s mind.

The final round progressed with everyone furiously trying to make the best deals they could to score big one last time in the Selling Phase. Steve had been a pretty even keel player throughout the game, not buying into any of the crazy deals the other players were offering, and remaining a shrewd bargainer making sure he got the best end of each deal he made. 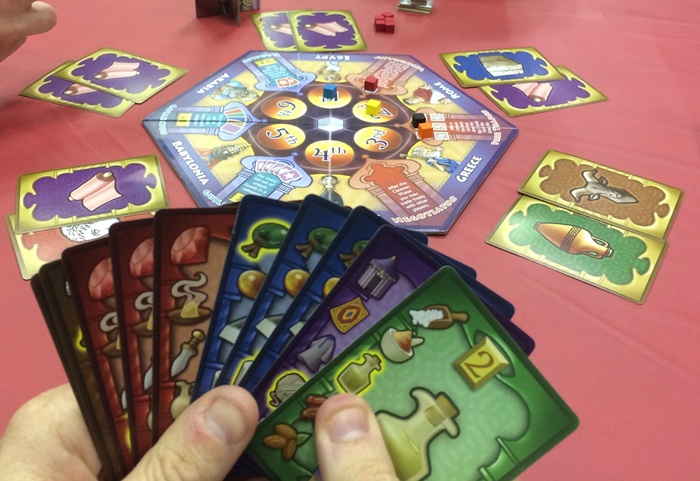 As the negotiations edged towards a close, Corey counted up his score and what he stood to earn in this last round. Suddenly, he looked Steve right in the eye and said, “I will trade you all of my victory points if you buy me a steak dinner at Elmo’s and a milkshake.”

The table got quiet for a moment while Steve mulled it over. Jacqueline tried to talk him out of the deal. Ruth stated she should get something from Corey as well since it was their money that would be spent on the steak. It turns out Steve REALLY wanted to win so he could hold that over Corey for years to come, and despite the protests and counter offers Ruth, Daniel, and Jacqueline tried to make Steve ultimately agreed to the deal. 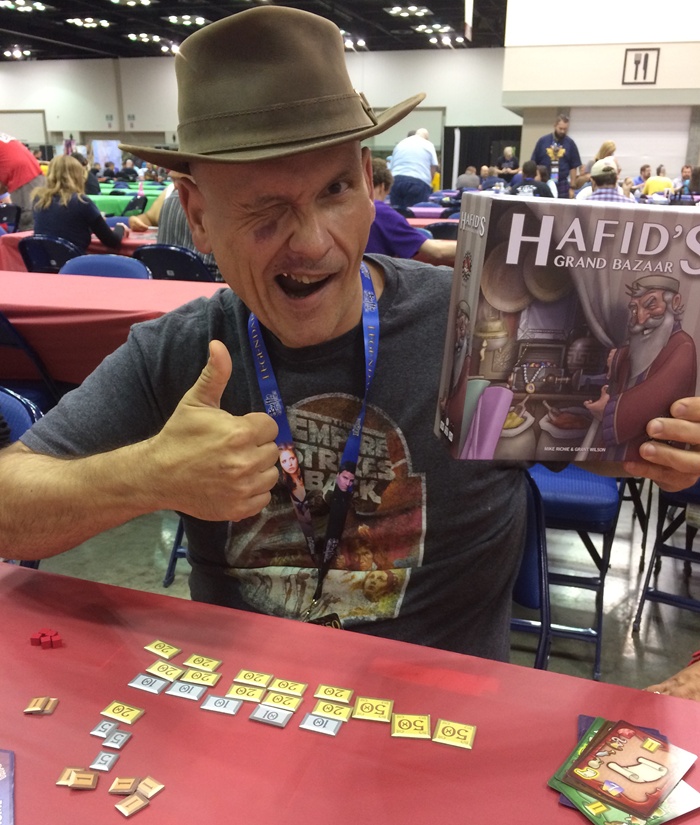 Steve ended the game with 442 gold talents/ victory points when he added the 208 he got from Corey to the 234 he had amassed on his own. He wouldn’t have won without Corey’s points. He was 4 points shy of Jacqueline’s score without them.

The rules of the Negotiation Phase are 1) You can’t lie, 2) You can’t steal, and 3) You must honor the deal. This group came by our booth on Saturday with photo proof that Corey DID get his milkshake and steak dinner and that he was satisfied with the deal. And in true Hafid style, Steve negotiated with our show staff to get to take one of our demo copies of Hafid’s Grand Bazaar home with him after the show. That is what we call dedication to a theme! 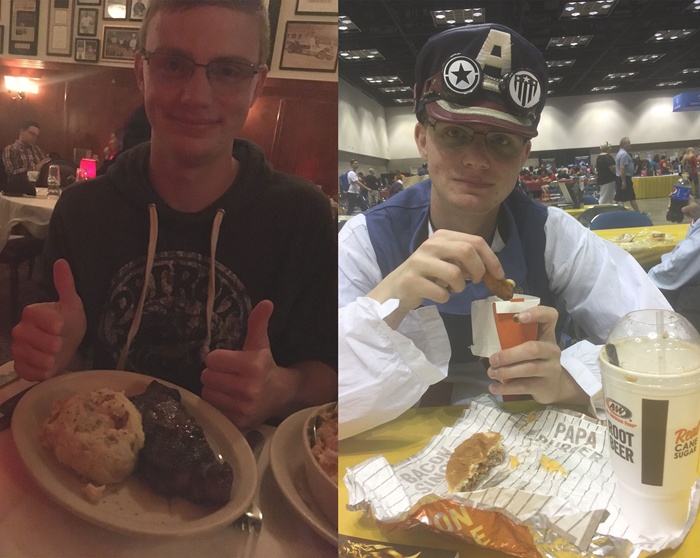 We are so honored to got to witness these gaming memories when they are made and we now have 5 new friends for life. We ran into our new friends several times during the course of Gen Con and hung out with Daniel (the former stranger, now inner circle member) for a few hours after the event talking about games, escape rooms, hotel horror stories, and all matters geeky and wonderful. THIS is the power of coming to the table with an appetite for fun! 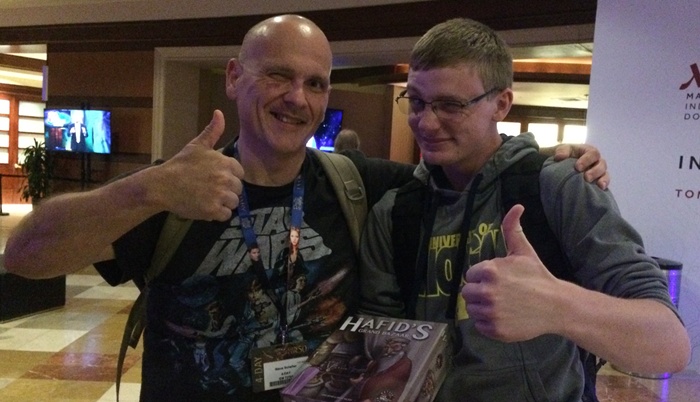 Want to have your own game night of making epic deals and manipulating the market? Get your own copy of Hafid’s Grand Bazaar at your Friendly Local Game Store September 20!